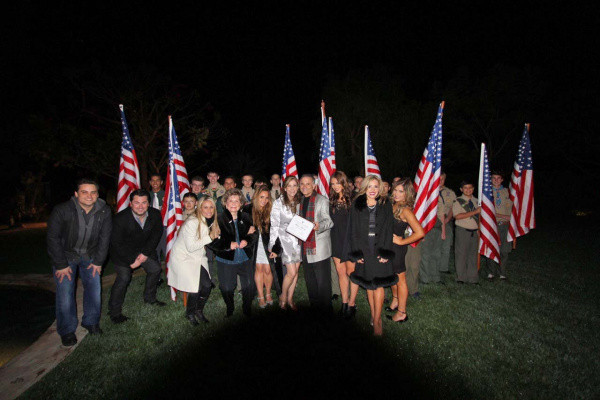 For his generosity to the community and commitment to integrity, Rand Sperry, of Orange Park Acres, will be honored among seven others by the Orange County Council Boy Scouts of America as a man of character.

“It’s a tough world that we’re in, and we’re trying to look for individuals who have created a legacy of service to be mentors,” said Ralph Linzmeier, event co-chair.

The selection process is extensive because every eligible man in Orange County is considered, according to Devon Dougherty, chief development officer with Boy Scouts of America. Each honoree is selected for his “devotion to family, faith and community.” The men also demonstrate the traits of Scout Law, among which are being trustworthy, helpful, friendly, brave and reverent.

This will be Sperry’s first recognition by the community, he said, and he is humbled by the acknowledgement.

Q. Why do you think you were chosen to be among this year’s Men of Character?

A. Well, I think anyone who is selected wonders why — why me of so many people in the county that do such great things and good things. You can always identify someone else and say, yeah they deserve it, they did a lot of things. I am involved in a lot of things, and I do it for my own satisfaction. I don’t do it for the acknowledgement. I give back, yeah, money, but a lot of it is time. So, I guess that’s why they honored me.

I’ve got a good reputation in the community because I own a real estate brokerage company and it’s national and we invest in real estate in the multimillion dollar range. I do have a little bit of a profile, being in the kind of business I am in. I’m proud to say that we run a great business and we’re very honest in what we do. We try to help businesses as well as give back to the community.

Q. How do you define character?

I know in my business I’ve had to make that decision so many times — somebody is being unethical, but yet they’re bringing in a lot of revenue to the firm. I let them go, and it’s the most difficult thing. You want to overlook it because you want the revenue. I have a lot of competitors that have no problem overlooking it, but that’s not who I am and that’s not what our company is about.

It’s hard to do the right thing, but that builds character more than anything else you can think of. It’s doing the right thing even though you don’t have to.

Q. I was told, as a man of character, you’re going to be a mentor for these Boy Scouts now. What kind of people do you hope they become?

A. What I hope is that they follow the path in life where their heart and their passion is, and not to do it for any other reason. I hope to be a mentor in that they go off and do something that they’re passionate about, (make) a good honest living and (put) family is first — I think that’s so important and so many people miss that.

Go out there and learn how to be the best in your career, give back when you become successful and spend all the time you can with your family.

Q. What motivates you to do the right thing?

Q. What is important to you in life?

A. Especially speaking at 58 years old now, my family is obviously the most important thing. But I know, I don’t want to kid myself, the fact that I can support them is important. Everyone wants to say family first. I’m a very Christian Catholic, so God is of course No. 1. My oldest son and his wife announced on Christmas Eve that they were having a baby. You know, I thought to myself, if somebody had come in here and put a million dollars on the table, I couldn’t have been nearly as excited as I was when they said that.